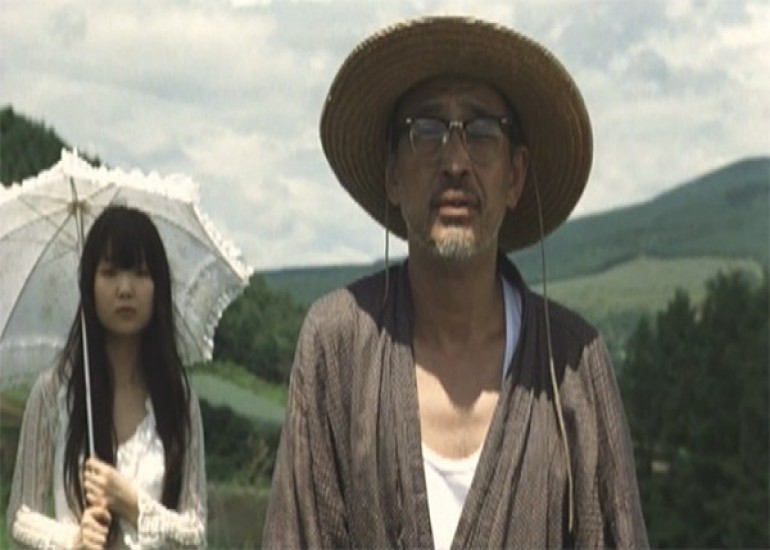 The film is available here:
http://www.pinkeiga.tv/featured/dependence.html

Chasing one’s dream, finding love under extraordinary circumstances or gaining affirmation throughout adversity, are subjects which have long been part of the cinema going experience, as we often find them serving as crutches for our own desires and fears.  Tapping into relatable themes of loneliness, parental anguish and depression, Yuji Tajiri’s Dependence (otherwise known as Forest of Virtue on home video, or the literal original title A Slut gets Wet in the Noon) tackles such issues via the most pertinent of means, resulting in a tale of welcome simplicity.

The story sees Hayato Tsukamoto (Daishi Matsunaga) return home to visit his father, Masakuni (Kazuhiro Sano), who has recently been involved in a car accident and has been cared for by a friend of Hayato’s named Fuko (Mari Yamaguchi).  Joining him is his wife, Ami (Akebi Futsumoto), who has recently endured a miscarriage and has suffered through depression ever since.  Hoping that the trip will be good for Ami’s health, Hayato encourages her to enjoy the rural landscape while she attempts to make peace with herself.  Meanwhile, he enjoys being back in the company of old friends, including Fuko’s boyfriend Daichi (Yuya Matsuura), who dreams of hanging up his farming gear and escaping to the big city.  When Ami strikes up a relationship with Masakuni, upon hearing about a beautiful waterfall situated nearby, they embark on a journey of sexual discovery, which soon threatens to destroy the foundation of their family.

Japan’s pastoral landscapes have often served as metaphorical devices on film, whether that is to aid the protagonist’s journey toward becoming a greater person; owing to remind people of where they came from, or being juxtaposed against the modernisation of society, which has required rural assimilation in order to thrive.  Dependence is a picture which takes these viewpoints in order to illustrate characters’ hardships, perhaps biting off a little more than it can chew at times.

Although Yuji Tajiri’s intentions come across reasonably well, there’s a sense that his direction wanes at certain intervals.  While the story of Hayato and Ami appears to take centre stage, the lack of charisma shared between the two actors soon sees our focus shift to the character of Fuko, who bears much more relevance to the overall message of the film, despite her background presence at first encounter.  As the plot unravels through her eyes, this narrative evolution is made easier to digest, not only on account of Futsumoto’s stoic performance, but also through the sorry series of events that Fuko is made to suffer: from discovering the truth about what Ami is up to while keeping her silence, to being dumped by Daichi, whose father never wished for him to spread his wings.

The sense of entrapment, which overshadows the majority of Tajiri’s characters, spearheads events to a satisfying enough conclusion, using rural symbolism and maternal compassion to support any social commentary contained within, while the numerous sex scenes do their job to prolong events, however pedestrian their inclusion.